Sensei Holzman is a 5th Degree Black Belt in Karate with additional ranks in Kobudo (3rd), Escrima (1st), and Tae Kwon Do (1st). He has been training in the martial arts since he was nine years old and earned his first black belt in 2001. Sensei Holzman is an avid competitor traveling the country, and World to compete against the best. He has earned several world titles in Ireland, Spain, Italy and Portugal and for the last 4 years he has been rated a Top 10 competitor in the North American Sport Karate Association (NASKA). He has been fortunate enough to train with Tadashi Yamashita, Bill “Superfoot” Wallace, John Sharkey and many other talented and passionate martial artists. He also serves as co-director of the Milwaukee Open Martial Arts Tournament.

Sensei Holzman graduated in 2012 with a degree in science and a teaching certificate, He worked for Northwest Passage, an at-risk youth facility in Frederic, WI. During his time there, he implemented a martial arts program for long-term residents who were exhibiting positive behaviors. Additionally, he has created and taught programs for a variety of schools, fitness centers, colleges, and other martial arts academies. Following his work in treatment and rehab, he worked as a special education teacher in Bayfield High School, and then as a middle school science teacher here in Milwaukee before coming to the Black Belt Leadership Academy.

Sensei Holzman is now the majority owner and head instructor of Black Belt Leadership Academy. He works every day to provide the best martial arts instruction to his students and create a supportive, challenging, and welcoming atmosphere for every person that walks through the doors. He hopes to share with his students some of the passion and excitement, as well as the discipline and work ethic, that has allowed him to pursue his dreams in martial arts.

Mr. Beal graduated from Nathan Hale High School and is currently a student at UW-Milwaukee earning his degree in counseling troubled youth. He uses his experience as a trauma counselor to promote empathy in the Academy and to guide his students toward self-confidence and self-discipline 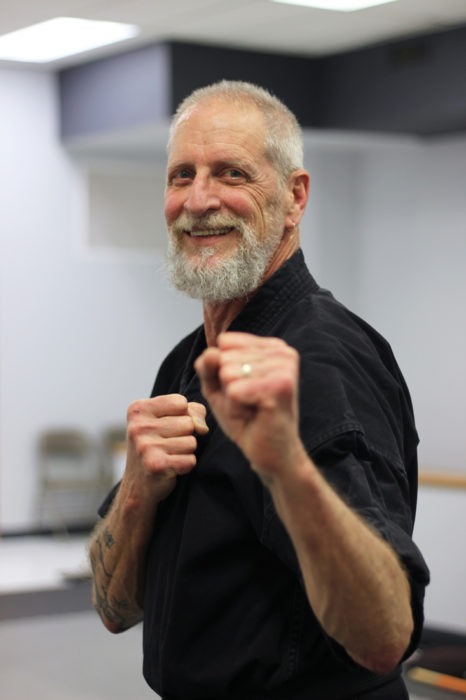 Sensei Weinberg was awarded his 6th Degree Black Belt in 2016 by Grand Master Robert Likes. He has been training for over 30 years and teaching Karate for more than 20. He earned his certification as a sports weaponry instructor from the International Sports Chanbara Association following his training with Shihan Dana Abbott, and his 3rd Degree Black Belt in Kobudo under Sensei Holzman. He has additional seminar training in self-defense with Grand Masters Ron Van Browning and Robert Likes, karate instruction with Mike Swain, Tom Callos, and Dave Kovar, and Shotokan with Master Thulasiraman Ravichandran.

Sensei Weinberg is co-director of the Milwaukee Open Martial Arts Tournament and continues to be an avid competitor himself, recently earning two Diamond National divisional championships and the senior Grand Championship at the Southern Wisconsin Open.

Sensei Weinberg’s unique combination of skills include a Ph.D. in Theatre and 40+ years of teaching Theatre and Communications. With his wife Jenny Wanasek, he founded the Center for Applied Theatre which uses theatre techniques to do problem-solving and violence prevention work with youth and adults in schools, businesses, and service organizations. His daughter Rachel and son Noah are 3rd Degree Black Belts and have been successful as national competitors and karate instructors in the Madison area, and daughter Arielle Weber was the Student Services Director at the Academy for many years. He considers his most important achievement as the positive actions, attitudes, and accomplishments of his children and his students.

Ada Gerth: Miss Gerth is a 2nd Degree Blackbelt in Karate and has been an instructor since 2015.

J.D. Gentil: Mr. Gentil is a 1st Degree Black Belt in Karate and began teaching in 2021.

Samantha Gentil: Miss Gentil is a 1st Degree Black Belt in Karate and began teaching in 2022.